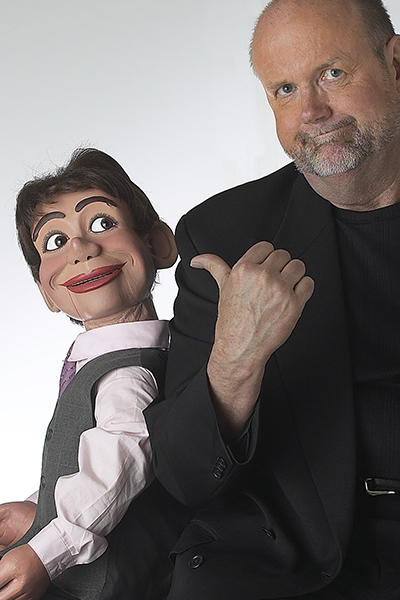 Born to a family of professional musicians, David Malmberg has had entertainment in his blood from the beginning. He remembers clearly the first time he saw ventriloquist Paul Winchell on TV and felt the first surge of desire to learn the art of ventriloquism. By the time he was 13, David was practicing voice throwing in the classroom much to the chagrin of his teachers! His parents eventually felt he had potential and purchased a professional figure for him when he was 15. According to David: "It was in those early years that I discovered the exhilaration of live performance."
Later, he went off to serve his country in the United States Navy, continuing his voice throwing antics in boot camp. This eventually caught the attention of his superiors and he was assigned as a DJ for a couple of radio stations in the American Forces Radio network in Cuba and Spain. This gave David a platform to continue practicing his craft. He recalls: "I used to do the morning show in Spain. If I overslept, the whole military base would oversleep with me because they all had their alarms set to the radio station!" After serving his country, David returned to the United States. He thought: "I should get a real job." So he entered the broadcast business in Minneapolis, MN. This began a 20 year successful run as the operations director of radio stations K102 and WDGY in Minneapolis. David received many industry awards during this time including being named one of the 'Top Ten Program Directors' in America in 1990 by Inside Radio. It also gave him continued opportunities to practice voice characterizations on the radio and in hundreds of commercials.
Eventually though, the desire to experience "live performance" resulted in David stepping down from his post in the broadcasting business to pursue a career as an entertainer. David said, "They all thought I was crazy. You know, don't give up your day job sort of thing."
Well, crazy or not, David has been crisscrossing the country with his show that features ventriloquism and music. At approximately 125 shows a year David estimates he has performed in front of more than a half million people. He has also had the pleasure of working with such greats as: Merle Haggard, Mary Chapin Carpenter, The Statler Brothers, Kathy Mattea and Glen Campbell, to name a few.
When asked about what drives him, David said, "Well, if you're lucky, you find out your passion in life. For me, it is laughter and music. I have been fortunate enough to do both for a living."