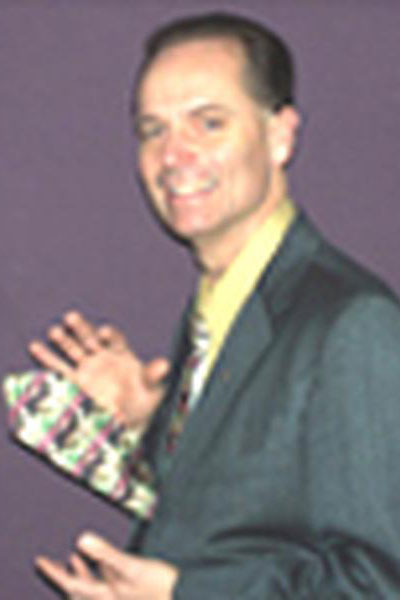 Gayle Becwar and his funny, bizarre, innovative, magical performance will fulfill all of your entertainment needs. Growing up in a family of magicians, Gayle's first introduction to entertainment came as a child, performing with his family's traveling magic show. Since then, Becwar has spent several years presenting his fresh, fast paced magic and comedy act as a full time solo professional. Audiences from coast to coast will attest that his act is truly unique and entertaining. Becwar has opened for Dan Seals and Holly Dunn, and worked a series of shows with legend comedienne Phyllis Diller. He recently taped for HBO's Comic Relief, where he scored big to thunderous applause, and for Showtime in their Funniest Man in America Contest. Gayle Becwar has a likable, ad-libbing style that makes each of his performances special and exciting. His college degrees in broadcasting and Speech have contributed to his professionalism, as well as a warm and engaging rapport. From comedy clubs, colleges and state fairs to banquets, conventions, and trade shows, Becwar's magic, mindreading and humor involves all types of people. Your audience will be no exception. The Associated Press said it best, "More than just a magician, Gayle Becwar is a complete entertainer." For quality entertainment at a reasonable price, contact Comedy Productions today!