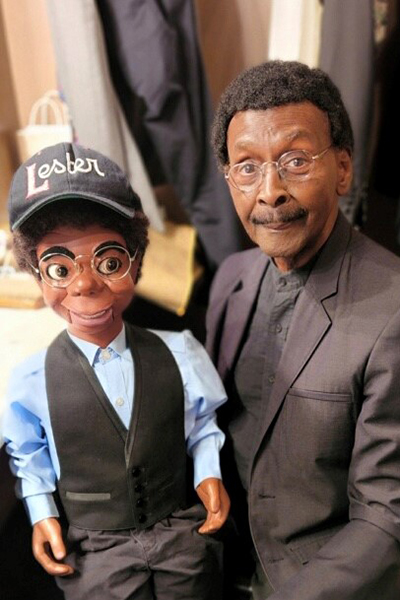 Show business Legends, Willie Tyler and Lester, are a lovable ventriloquist act - just don't ask Lester! Willie and Lester began their act in local variety shows and talent contests. After four years in the U.S. Air Force, Willie returned to Detroit and a few years later signed with Motown Record Corporation. For the next eight years he and Lester toured with all the Motown greats; Smokey Robinson & The Miracles, Diana Ross and The Supremes, The Temptations, Little Stevie Wonder, Marvin Gaye, and The Four Tops. Back in the day, Lester says he was a member of The Four Tops when they were called, The Four Tops and a Stick!
Their TV credits are impressive, with appearances on The Tonight Show (NBC), ABC Weekend Specials, "Pacific Blue," (USA Network) "In The House, (NBC) "Jimmy Kimmel Live," (ABC) and their very successful appearance on "The Late Show Starring David Letterman." (CBS) They have also been seen in numerous TV commercials: McDonalds and Maxwell House Coffee to name a few.
Musical Ventriloquist, Willie Tyler is also an accomplished song writer. He has written several compositions. Some for his jocular sidekick, Lester. During his years traveling with the Motown artists (Motortown Review) Willie started publishing songs (Wil-Les Music.) Some are humorous and some are down right "Thought Provoking."
Lester is a humorous little fellow and he sings pretty good, too! Although he was born in the woods and worked his way out. Once you have seen him in action, you will never forget this little "chip off the old block!" "Saw me open and count my rings." That's the answer Willie Tyler's little buddy gives when asked how old he is.
Willie Tyler and Lester are a clean and quirky duo that can work any room, big or small, young or old- and leave 'em wanting more.

Motown Returns to the Apollo

In The House - NBC